I have been surprised how hard it is to maintain an internal library in Python. There are constantly issues for end users where something doesn't work. It turns out one feature used was introduced in Python 3.8, but someone was stuck on Python 3.6. Changes to Pandas and PyArrow meant some combinations of those libraries broke. It's really hard to build confidence in your system when lots of people end up with breakages.

A Python library needs to be tested on multiple versions of Python and dependencies. The best way to get confidence that a program is working, and continues to work as you change it, is to write good tests of its functionality. When you've got a Python application you can just pin the versions of everything (e.g. using pip-tools), specify a version of Python, and both deploy and test in a controlled environment, or wrap it in a container. For a library you have to support multiple versions of dependencies (otherwise no two packages would be compatible since they would be locked to different versions), and different versions of Python (because some users would be stuck on an old version and some on a new). Obviously you can't support every possible combination, but for the dependencies and versions that are most likely to cause issues (fast changing things) you can support and test a few major versions.

Tox is a really useful tool for testing a library on multiple combinations of Python versions and dependency versions. It handles setting up different virtual environments with the correct set of dependencies and running the tests across all of them. This is good because it takes quite a bit of discipline to set them up manually and check them; but you want tests to be easy and reliable to run.

Here's an example from the tox documentation. You can specify different sets of dependencies that are combined together in a test matrix.

Even if you are only supporting a very limited set of versions it can still be useful to use Tox to make sure you're actually testing those versions, and not whatever you happened to have in your virtualenv at the time. 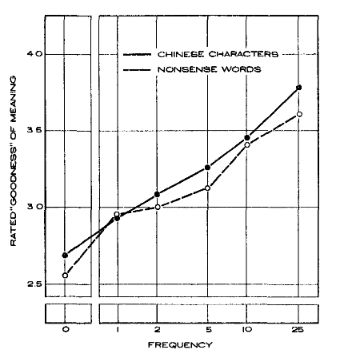 The Mere Exposure Effect says that people will prefer something they've seen or heard multiple times before than something less familiar. The Robert Zajonc paper Attitudinal Effects of Mere Exposure covers this topic comprehensively. It includes experiments showing people like foreign words, chinese characters, photographs and nonsense words they have been exposed to more than if they had been exposed less. There are other aspects that impact affect more than mere exposure; like people prefer pronounceable words or photographs of smiling people, but exposure almost always helps.

Something that has always bothered me about pip in Python is that you would get errors about inconsistent packages. Things still seemed to work surprisingly often, but it meant that the order you installed packages could lead to very different results (and one ordering may cause your test to fail, even if that doesn't succeed). Now there is a new resolver in Pip 20.3 for pip that checks the dependencies and tries to find versions that meet all constraints.