Following from my last post (and Veblen and Young’s Projective Geometry) consider a projective plane satisfying the axioms:

Then for d>=3 is equivalent to the projective space of lines over a division ring (or skew field).

Kolmogorov asked the question what projective spaces can we do analysis on? In order to do things such as find tangent lines we are going to need some sort of topology.

Kolmogorov apparently proved that for a (Desarguian) projective space if the set of points is compact and infinite, the set of lines is compact and the function mapping two distinct points to the line they lie on is continuous then the underlying division ring is infinite and locally compact (in a paper translated as “The Axiomatics of Projective Geometry” in Selected works of A. N . Kolmogorov edited by V. M. Tikhomirov). Such an object is called a continuous projective geometry.

In response Pontryagin proved (see his book “Topological Groups”) proved that every locally compact infinite division ring contains one of: the real numbers, the p-adic numbers, the power series over the integers modulo p (p prime). Moreover we can classify these by their connectedness and characteristic: if the division ring is connected it contains the real numbers, otherwise it is totally disconnected.

Combining this with the Frobenius theorem we have the following: A locally compact connected field is isomorphic to the real numbers, the complex numbers or the quaternions.

Separation theorems allow us to define regions and boundaries of regions, so we can start to talk about ‘relative lengths’ and ‘relative areas’. One way to approach the separation theorems in projective geometry is via ordered fields: Veblen and Young pursue such an approach; of course this doesn’t apply to an unordered field such as the complex numbers. Another is via topology; e.g. a line separates the plane it lies in into two (topologically) connected sets.

The calculus of real and complex numbers is well known; is there a corresponding exterior differential calculus of quaternions? Given two n-simplices in an n-dimensional affine space, there is a unique affine transformation from one to the other. The ratio of their hypervolumes is the determinant of the linear transformation. Is there an analogous determinant for quaternions (or octonions)?

Essentially no; Dieudonne extended the determinant to a non-commutative field by defining it as a map from matrices to the the division ring over its commutator subgroup (see Artin’s Geometric Algebra for details). This is about as good as you can do; any map from the general linear group on an n-dimensional (right) quaternion vector space to the quaternions that satisfies

then the image of the determinant is commutative.

In fact given any two distinct maps \(\mathrm{det} \colon \mathbb{H} \to \mathbb{R}_{\geq 0}\) satisfying axioms 1-3, one is a real power of the other. One way to construct such a determinant is to notice that quaternions can be represented by 2×2 complex matrices of the form \(\left(\begin{array}{cc} a & b \\ -\bar{b} & a \end{array}\right)\) where a and b are complex numbers. We can then take the absolute value of the complex determinant (this is called the Study determinant, which is the square of the Dieudonne determinant). Alternatively we could repeat a similar expansion for complex numbers in terms of real numbers, giving a quaternion as a 4×4 real matrix. We then define the determinant of an nxn quaternion matrix, as the determinant of the corresponding 4nx4n real matrix; this is called the q-determinant and is the square of the Study determinant. 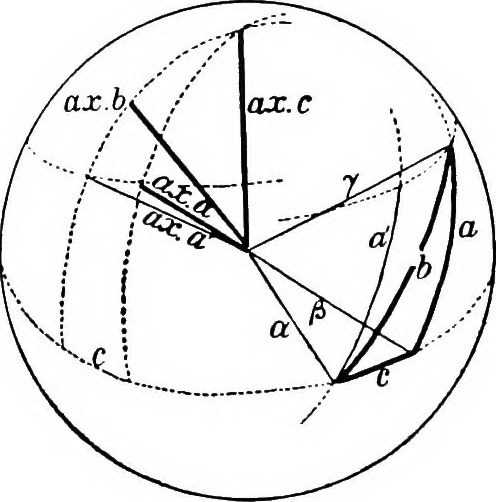 It is fairly easy to construct a geometry from algebra: given a division ring K we form an n-dimensional vector space, the points being the elements of the field and a line being a translation of all (left) multiples of a non-zero vector, i.e. of the form \(\{a\mathbf{v} + \mathbf{c}| a \in K\}\) for some fixed vectors \(\mathbf{v} \neq 0\) and c.

Interestingly it’s just as possible to go the other way, if we’re careful about what we mean by a geometry. I will loosely follow Artin’s book Geometric Algebra. In particular we have the undefined terms of point, line and the undefined relation of lies on. Then, for a fixed positive integer, the axioms are:

There are two main constructions of a projective space.