The computer networks that make up the internet are complex and handling an immense amount of traffic. So sometimes when you make a request it will fail intermittently, and you want to try until it succeeds. This is easy in requests using urllib3 Retry.

I was trying to download data from Common Crawl's S3 exports, but occasionally the process would fail due to a network or server error. My process would keep the successful downloads using an AtomicFileWriter, but I'd have to restart the process. Here's what the new code looks like:

We use a requests.Session to be able to store the retry logic. An advantage of Session is it reuses the TCP connections, and in my case made downloading twice as fast.

We then give the session information about how to retry on a domain. We then store the information in a HTTPAdapter where we give it instructions on how to handle requests from a domain or protocol. There we specify the Retry strategy, in this case trying at most 5 times and exponentially backing off starting at 1 second.

For a deeper dive into how to handle difficult cases with requests check out the findwork.dev blog on advanced requests usage, which also covers using timeouts (which is generally important but I haven't had an issue with yet). 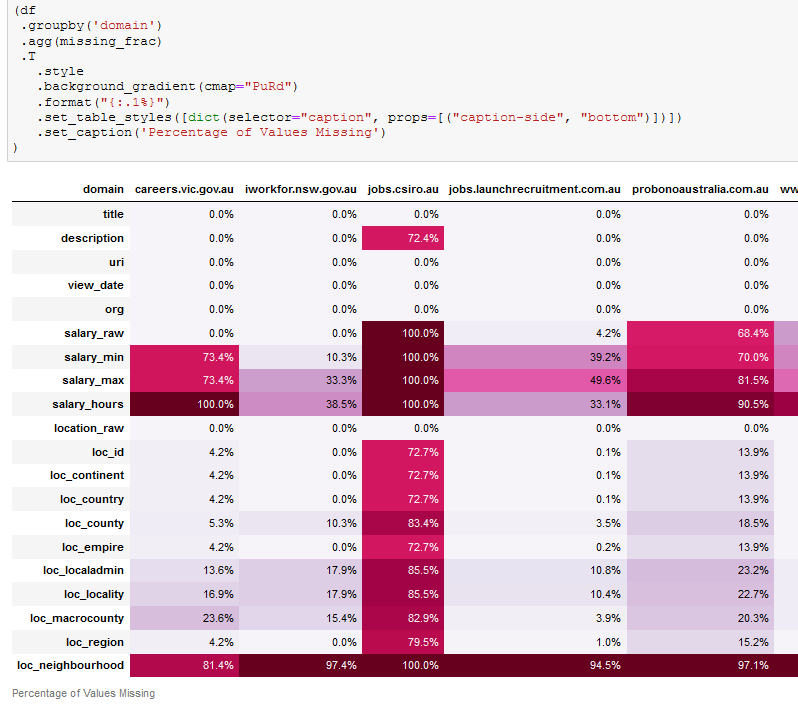 When looking at Pandas dataframes in a Jupyter notebook it can be hard to find what you're looking for in a big mess of numbers. Something that can help is formatting the numbers, making them shorter and using graphics to highlight points of interest. Using Pandas style you can make the story of your dataframe standout in a Jupyter notebook, and even export the styling to Excel. The Pandas style documentation gives pretty clear examples of how to use it.

I often have way too many Jupyter notebook tabs open and I have to distinguish them from the first couple letters of the notebook in front of the Jupyter organge book icon. What if we could change the icons to visually distinguish different notebooks? I thought I found a really easy way to set the icon in Jupyter notebooks... but it works in Firefox and not Chrome. I'll go through the easy solution works in more browsers and the hard solution.