Type hints in Python allow statically verifying the code is correct, with tools like mypy, efficiently eliminating a whole class of bugs. However sometimes you get the message found module but no type hints or library stubs, because that library doesn't have any type information. It's easy to work around this by adding type stubs.

When you see this error it's worth first checking that there aren't any types already available. Sometimes a later version of the library may have type annotations, so upgrading may make the message go away. There are third party type repositories, like data-science-types which is very helpful if you're using libraries like matplotlib, numpy and pandas. Other times someone has already written a type stub that's not in a package, like in the tqdm issue for a type-stub (and you can put this in tqdm.pyi in the root of your package directory).

If no one else has done the work for you then you have to do it yourself. Mypy has some documentation on stub files and PEP561 outlines the details of how to do it, but they're a bit heavy to read so I'll work through a simple example.

I was trying to typecheck a library with mypy that used warcio. When I ran mypy I got the following errors:

At the time of writing warcio doesn't have type annotations, so we have to write our own stubs. We can start with creating a blank stub; because it's a module we need to do it in the warcio direcory and have a __init__.pyi file (otherwise mypy won't find them).

We then get a more specific error about a missing module:

We don't need to write stubs for everything in the module for it to be typechecked; just the things we use. To get an idea of what to do it's helpful to look at example stubs that come with mypy in typeshed, and check the source code you're stubbing. In this case we're using ArchiveIterator and all I was using was initialising it (the __init__ function) and iterating over it (the __iter__ and __next__ function). So I just took these methods from the source of warcio.archiveiterator and replaced the bodies with ...:

Running mypy now gets an error about Name 'BUFF_SIZE' is not defined. In the original code it's imported as from warcio.utils import BUFF_SIZE; but if I do that I'll have to stub warcio.utils too. I can just cheat and add a type declaration at the top of the file.

Surprisingly this is enough to make mypy happy. However we haven't told it much about the types; so there's not much it can actually check. For example if I pass the string 'Yes please' to no_record_parse mypy will say everything is good.

It's fairly easy to infer the types for __init__. The tricky one is fileobj; a quick StackOverflow search gives the types for filelike objects. Normally you pass gzipped files in byte mode to ArchiveIterator so it can take at least typing.BinaryIO, but I don't know whether it can take text files too and could be typing.IO. Generally it's safer to pick the more restrictive type, and then if we get a type error broaden the type as necessary. The rest of the types are clear from the default values and the method has no return in the source.

I know from library interface that the iterator yields ArcWarcRecords, and so the remaining methods are easy to annotate types too. Typing a Generator is a bit complicated, it takes 3 types, but when you don't send to the generator or return from it the last two arguments are None. All together this is typed now.

However now I get a message from mypy that I haven't typed warcio.recordloader yet; I need to add annotations for ArcWarcRecord.

So I can easily create that stub in warcio/recordloader.pyi and add an ArcWarcRecord class to get more specific issues about the methods I use.

In this way you only need to stub the methods you actually use, and the task is manageable. Trying to annotate the whole warcio codebase is quite a task, although this approach gets you a long way.

At the end with a little work annotating the library you get some notion of type safety. Of course if you get the types wrong in the stub, particularly the return types, it may pass typecheck but still be wrong. Another gradually typed language, Typed Racket, installs contracts at the boundaries between typed and untyped code, actually asserting the types are correct. This could be a way to get assurance you're picking up wrong types early.

To get an idea of how type checking can help in this same codebase I was calculating the end byte given an offset and a length; end_byte = start_byte + length. This was then formatted into a string f"{start_byte}-{end_byte}". Unfortunately start_byte and length were strings, so the code ran fine but it concatenated the strings rather than adding their numbers. A type check would have caught this early and clearly pointed out the problem, rather than leaving me scratching my head for a while working out what happened. 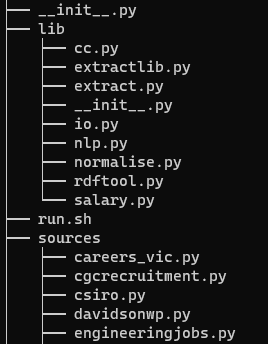 I've been trying to extract job ads from Common Crawl. However I've been stuck on how to structure the code. Thinking through the relationships really helped me do this. The architecture of the pipeline is a set of methods that fetch source data, extract the structured data and normalise it into a common form to be combined. I previously had these methods all written in one large file, adding each extractor to a dictionary, which was a headache to look at. 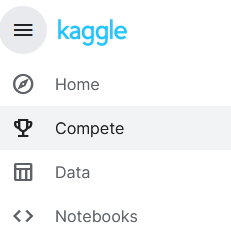 Analytics projects are messy. It's rarely clear at the start how to frame the business problem, whether a given approach will actually work, and if you can get it adopted by your partners. However once you have a framing the modelling part can be iterated on quickly by structuring the project like a Kaggle Competition. The modelling part of analytics projects will go smoothly only if you have clear evaluation criteria.