A monad in languages like Haskell is used as a particular way to raise the domain of a function beyond where it was domain. You can think of them as a generalised form of function composition; they are a way of taking one type of function and getting another function. A very useful case is the maybe monad used for dealing with missing data.

Suppose you've got some useful function that parses a date: parse_date('2020-08-22') == datetime(2020,8,22). However sometimes None will be passed as an argument which leads to an error, but you just want it to return None. You can explicitly write this as a new function:

This is pretty straightforward to do, but it means that whenever you are writing or using a function you have to think about how it handles None. Do you want it to be an error, or to pass through?

The approach generally taken in Haskell is that it should be an error, but you can get this behaviour using the Maybe monad. Explicitly there's a functor (a fancy name for a function that acts on functions in a composable way) that takes a function and extends it like our parse_optional_date example. In Python it would look something like:

This takes one function and returns a new one that passes through nulls; if we were going to add type annotations it would look something like:

In Haskell you will generally see Monads defined in terms of the bind (>>=) operator, which is closely related.

To be clear, I wouldn't advocate actually doing this because Python is not a functional language, and you're going to end up with some gnarly stack traces and hard to understand functions. But it's a useful concept to have in mind when designing functions; it's systematically trivial to add support for None.

This is just one example of a monad to lift functions. Another one is map which is a functor that raises a function to one that can handle lists. In Haskell the idea is even used to extend pure functions, that are easy to test, into scenarios where there is I/O or state. However I'm not convinced the conceptual overhead is always worth it.

If you do want to use Maybe pattern in Python here are some libraries that offer it with increasing levels of sophistication:

If you've got a distribution you may want a way to tell if it has multiple components. For example a sample of heights may have a couple of peaks for different gender, or other attributes. While you could determine this through explicitly modelling them as a mixture the results are sensitive to your choice of model. Another approach is statistical tests for multimodality. One common test is Silverman's Test which checks for the number of modes in a kernel density estimate; the trick is choosing the right width. 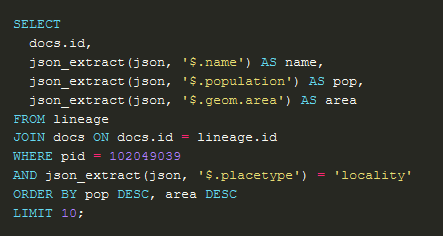 Placeholder is a great library for Coarse Geocoding, and I'm using it for finding locations in Australia. In my application I want to get the location to a similar level of granularity; however the input may be for a higher level of granularity. Placeholder doesn't directly provide a method to do this, but you can use their SQLite database to do it. For example to find the largest locality for East Gippsland, with Who's On First id 102049039, you can use the SQL.