SentenceTransformers provides a convenient interface for training linguistic embeddings using Transformers, which can be used for example with approximate nearest neighbours for search. However it's not obvious how to train with datasets larger than memory; for example I'm not sure how to use it with Huggingface datasets. In fact it's not too difficult using the flexibility of PyTorch's datasets and PyArrow's memory mapping mechanism to train it out of core and avoid an Out of Memory error.

First you will need to rewrite the data into an arrow file on disk to perform memory mapping. If it's Parquet, ORC, or CSV files it can be read in as a PyArrow Dataset (even from a remote filesystem such as S3 or HDFS), and then written to a local file. By using the to_batches we can do this without ever having to store the whole dataset in memory; we just need enough room to store it on disk.

Once the data has been written like this we can memory map it, following the PyArrow Cookbook. This completes almost instantly because it doesn't actually load the data.

SentenceTransformers expects the data as a Dataset of InputExample. A Dataset is just any Python class that has a len and getitem methods, so we can fetch the data from the PyArrow Table by index, and convert it into an InputExample.

Evaluation is a bit more prickly. The built-in SentenceTransformers evaluation module takes the data in as lists to only ever encode the data once, and writes the output to a CSV. If you've got more data than fits in memory you may want to write your own incremental evaluation routine. If there is a lot of time spent recomputing embeddings it could be worth caching the results, for example using diskcache.

As I start to use SentenceTransformers more I'm finding some limitations of it's inbuilt training loop (e.g. it doesn't support gradient accumulation and so for large models I have to use really small batches which leads to poorer training with the standard parameters). But this is a good way to get started with really large datasets, and abstracts well to other cases, all thanks to the simplicity and flexibility of PyTorch's concept of a Dataset.

I'm working on a project to extract books from Hacker News, and want to link the books to records from Open Library. The Open Library data dumps are several gigabytes of compressed TSV, so are too big to fit in memory on a standard machine. The Libraries Hacked repository imports it into a PostgreSQL database, but I don't want to set up a Postgres database for an analysis job if I can avoid it. 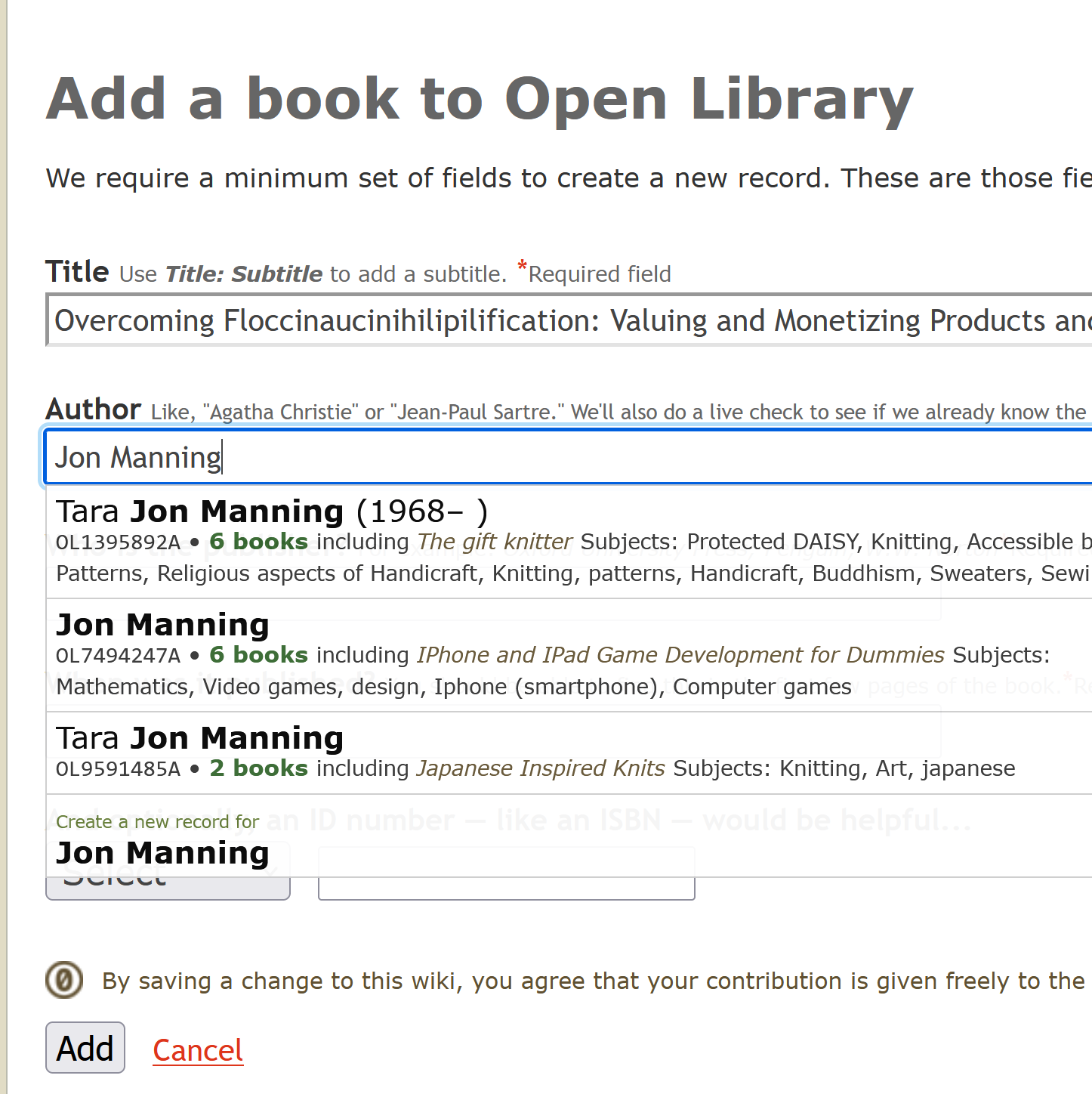 I've been looking at Open Library as a knowledge base for books. A lot of the data here is manually uploaded by people, and the user interface has a big impact on the data they enter. To understand the data better I wanted to actually go through the process of adding a book, Overcoming Floccinaucinihilipilification by Jon Manning, and this article documents the process. Overall Open Library prioritises making it easy for people to add data, and then has facilities to edit it.