I had to debug some Powershell, without knowing anything about it. I found Write-Warning was the right tool for printline debugging. This was enough to resolve my issue.

I first tried Write-Output but apparently it doesn't work inside a function which I found misleading for a while (at first I thought that it wasn't getting to the function). Write-Warning worked straight away and I could see in bright yellow what was going on.

One interesting thing with Powershell is they can have CmdletBinding at the start of the function. Everything in to the end of the binding should be considered part of the function and you should only put your debugging statements beneath it (so starting at the ... below):

In the end I found the issue was some JSON data was being string interpolated without being properly escaped. A quick search found ConvertTo-Json resolved the issue.

It's sometimes amazing how far you can get with print statement debugging knowing generically how programming languages work (though it may be much trickier in a non strict language like Haskell!).

Any analysis where the results won't change a decision is worthless. Before even thinking of getting any data it's worth being clear on how it impacts the decision. There's lots of reasons people want an analysis. Sometimes it's to confirm what they already believe (and they'll discount anything that tells them otherwise). Sometimes it's to prove to others something they believe; possibly to inform a decision someone else is making. But it's most valuable when it effects a decision they can make with an outcome they care about. 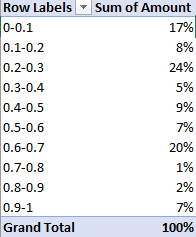 Putting numeric data into bins is a useful technique for summarising, especially for continuous data. This is what underlies histograms which is a bar chart of frequency counts in each bin. There are two main ways of doing this in Excel with groups and with vlookup (you can also do this in SQL). If you want equal length bins in a Pivot Table the easiest way is with groups. Right click on the column you want to bin and select Group