Dictionaries in Python (in other languages called maps or hashmaps) are a useful and flexible data structure that can be used to solve lots of problems. Part of their charm is the affordances in the lanugage for them; setting and accessing with square brackets [], deleting with del. But sometimes you want a dictionary that persists across sessions, or can handle more data than you can fit into memory - and there's a solution persistent dictionaries.

Python has an inbuilt solution called shelve which does this using dbm. There's also the sqlitedict library (from the makers of Gensim), which builds on sqlite. They both allow strings as keys and arbitrary pickleable objects as values. The best thing is they look and feel like ordinary dictionaries (with the caveat that if you mutate the value it's only updated on disk with an explicit assignment). Sqlitedict has some advantages coming from sqlite, including handling concurrent access and multiple threads (although internally writes are serialised).

If you're running out of memory in a dictionary putting it into one of these offloads it to disk, which means you can free up a lot of memory at the cost of slower access and modification. When running a periodic batch job, or a process that may fail, this gives a way to save state between runs. You could even use it as a simple task queue between processes. You can then back up the state simply by backing up the files (as long as they're not being written to).

There are many cases when you'll want a more robust solution, like persisting to a more versatile database like Postgres (or even using SQLite directly), or maintaining a proper task queue like Celery on Redis or RabbitMQ. But all this infrastructure has a lot of overhead; for many cases it's just easier to use file-base databases through a dictionary interface.

Scrapy is a fast high-level web crawling and web scraping framework. But as much as I want to like it I find it very constraining and there's a lot of added complexity and magic. If you don't fit the typical use case it feels like a lot more work and learning doing things with scrapy than without. I really like Zyte (formerly ScrapingHub) the team behind Scrapy. They really know what they're talking about with great blogs about QA of Data Crawls, guide to browser tools, how bots are tracked, and Scrapy's documentation has a very useful page on selecting dynamically-loaded content. 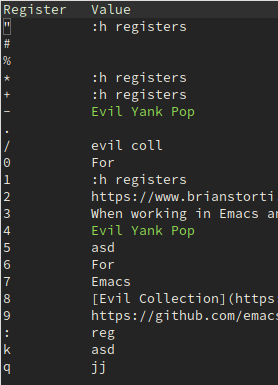 I use Vim keybindings in Emacs through Evil Mode and Evil Collection. Often I'll copy something, make some edits, and then want to paste the text. The problem is that the edits changed what was on the register and I want to recover that text. In Vim (and Evil mode) I can type :reg to see what's in the registers, find the value I want to paste, commit the register to memory (for example 8), exit and then paste that register ("8p from normal mode, C-r 8 from insert mode).