When there's something unexpected happening in your Python code the first thing you want to do is to get more information about what's going wrong. While you can use print statements or logging it may take a lot of iterations of rerunning and editing your statements to capture the right information. You could use a REPL but sometimes it's challenging to capture all the state at the point of execution. The most powerful tool for this kind of problem is a debugger, and it's really easy to get started with Python's pdb.

I'll cover some basic techniques I use, but check out the manual for all the detail.

Getting into the debugger

The easiest way to get into the debugger is to invoke your python script with pdb. So instead of python mymodule.py you run python -m pdb mymodule.py. You then will drop straight into a (pdb) prompt. If the script is going to raise an error then just type c (for continue), and you'll drop back into the debugger as soon as the issue arises.

If you want to break somewhere an error isn't raised you can set a breakpoint where you want to inspect. You can do this from within pdb with b (for break), for example to break at line 92 just type b 92 or to break when myfunction is called type b myfunction. Once you've set your breakpoints you can continue until you hit one.

Another way to set a breakpoint is by editing the source file and adding breakpoint() (for Python versions before 3.7 you will need to use import pdb; pdb.set_trace(). Now when the script is invoked normally (e.g python mymodeule.py) it will start a pdb debugger at that line.

You can even use pdb in Jupyter notebooks. After an error write %debug in a new cell and you'll have a debugger. Just be careful because you can't access stop the debugger from Jupyter, you'll need to exit it (and if you delete the cell you may get into an unrecoverable state).

Once you've hit the breakpoint you'll want to have a look around. The first thing I generally do is run:

This will show the variables available in your local environment. I use .keys() because sometimes a variable will be a giant list that pdb spends screens printing out. If you just want the arguments of the function that you're in type a (for args).

You can then run normal Python commands to inspect what is happening, but there are a few caveats. You can't type multiline commands (sometimes you may want to use a ; as a statement separator in a function definition). Many letters are used by the debugger (like n, c, etc), so if you need to print a variable of this name you can use p to print it. Also lambdas just don't work in pdb. If you need some of these features you can go into a python interpreter by typing interact.

Navigating with the debugger

The debugger lets you know the location of the file you are in and the line. Often the error will be deep within some called function instead of the code you've been working on. The debugger let's you navigate around to see what is happening.

The most useful commands are u (up) for going higher in the stacktrace. I will often start by running u until I'm in some code I am familiar with. You can go back down again if you're not sure what's happening with down.

You can step down into the current function being called, or you move to the next line. When you're finished you can continue. After an error it will restart the program (reloading the source), so you can see the effect of any changes you've made to the source code.

Next time you need to handle an error in your Python code run python -m pdb or set a breakpoint() and open up the pdb manual. It's a great way to find out what's going on by uncovering your wrong assumptions through interactive querying.

One trick I use all the time is calculating percentages in SQL by dividing with the count. Percentages quickly tell me how much coverage I've got when looking at the top few rows. However Presto uses integer division so doing the naive thing will always give you 0 or 1. There's a simple trick to work around this: replace count(*) with sum(1e0). Suppose for example you want to calculate the percentage of a column that is not null; you might try something like 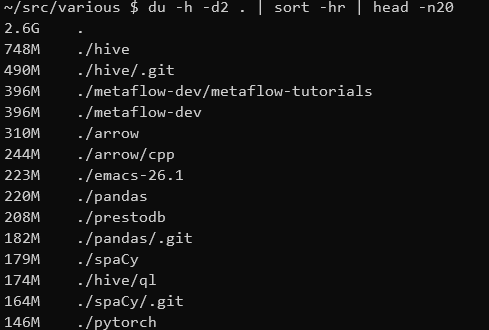 When your harddrive is filling up the du utility is a great way of seeing what's taking up all the space. It can recursively walk through directories to a maximum depth, and print it in human readable sizes. I'll normally start by running df to see what space is used and available. It's worth looking at the Mounted On column if you don't administer the machine because sometimes there are special partitions for large files.