There are two main constructions of a projective space.

This second construction can in fact be extended to all projective planes. Given a skewfield we have a natural way of representing two dimensional (left)-affine lines, as the set of points (x,y) satisfying the equation y = xa+b for some a and b. For general planes we extend the notion of this triple T(x,a,b)=xa+b. A planar ternary ring is a set R with at least two elements and a ternary operation \(T: R \times R \times R \to R\) that satisfies:

We can conversely construct a ternary ring from a projective plane, but there are clearly a lot of choices to be made; we need to choose a line at infinity, a y-axis and some isomorphisms between the y-axis minus it’s intersection with infinity and other lines, and use the lines and these isomorphisms to define T(x, a, b). Different choices need not yield comparative ternary rings (see here for a necessary and sufficient condition).

It’s interesting to note a generalised construction of projective planes of the first type for every division algebra over the real numbers (including the octonions). The points and lines of the space are each the 3-dimensional Hermitian idempotents of unit trace (that is 3×3 matrices P satisfying \(P = P^\dagger\) , \(P^2=P\) so P is a projection, and trace(P)=1). A point P lies on a line Q when PQ+QP=0. It can be shown this is a projective plane (see Conway and Smith, On Quaternions and Octionions, for the details).

Following from my last post (and Veblen and Young’s Projective Geometry) consider a projective plane satisfying the axioms:

Then for d>=3 is equivalent to the projective space of lines over a division ring (or skew field).

Kolmogorov asked the question what projective spaces can we do analysis on? In order to do things such as find tangent lines we are going to need some sort of topology. 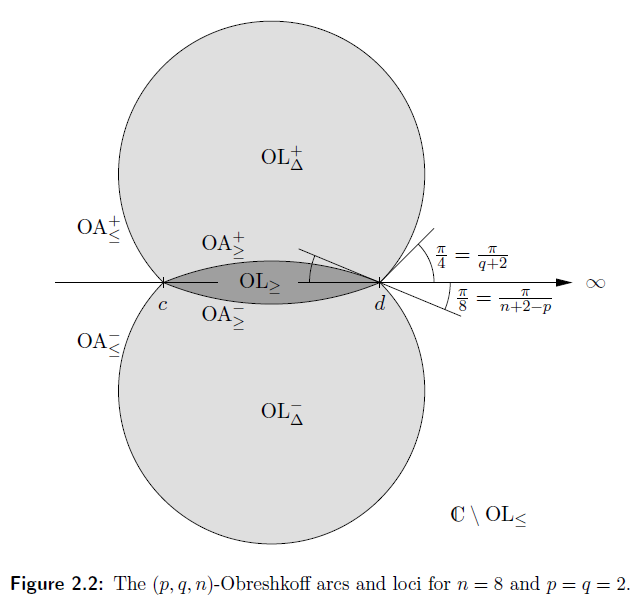 Given an degree n polynomial over the real numbers we are guaranteed there are at most n real roots by the fundamental theorem of algebra; but how do we find them? Here we explore the Vincent-Collins-Akritas algorithm.