My first professional job was for Haese mathematics which is a small family-owned South Australian business that writed and publishes mathematics textbooks. Working for a small company was a really interesting experience, I learned software development for their applications both for students and teachers, made animations, edited audio and did layout and graphic design of the books. Unfortunately I didn't make the effort to learn much about the business itself, which makes me wonder how big the market is for mathematics textbooks.

Time for some Fermi estimates. South Australia has around 2 million people. While we know there are more Baby Boomers than Millenials let's assume people's ages are evenly distributed between 1 and 100. Then there are about 20,000 people of any age. You would need a maths textbook for each years 7 through 12, but years 11 and 12 aren't compulsory and textbooks are more likely to be shared. Let's take it as about 5 textbooks per student lifetime so that's a maximum market of 100,000 textbooks per year. At $50 per book that's about $5 million maximum gross revenue.

However the real market will be significantly smaller because textbooks get resold and reused, especially in public schools. New textbooks generally get republished every few years in response to curriculum changes, so maybe this reduces the effective market by 50%. It's also going to be unrealistic to capture the whole market when there were other popular interstate publishers, but maybe they had 70%. So that's a gross revenue under $2 million.

Publishing books is relatively expensive; they typically run a few hundred pages and need to be printed, shipped and distributed. Variable costs could easily eat up 40% of the profits leaving about $1 million for salaries and marketing. Assuming marketing costs are marginal and average employee cost is all in $100,000 then it could support about 10 employees at no profit.

This explains why there weren't any serious competitors in the South Australian mathematics textbook market; it was quite small. Haese Mathematics started with teachers Bob Haese, Sandra Haese and Kim Harris writing maths textbooks for the South Australian curriculum in the late 70s and early 80s. Because the curriculum was different to the other states they wrote a books that catered exactly to the market and were able to gain enough adoption to write second and third editions. The company must have been very small then, and was unlikely to have been very profitiable; it was also much more labour intesive as they wrote the early editions on a typewriter!

I'm still curious as to how they employed me as an employee after their tenth. I do know they sold some of their textbooks in other states, especially the Northern Territory which shared the South Australian curriculum, but is a tenth of the size. They wrote textbooks for the IB, which is a huge market being international but also very competitive. There aren't many IB students in Australia (today there are fewer than 80 programs, so probably only a few hundred students) and so their existing distribution channels wouldn't work. However I do know they managed to sell a substantial number of textbooks, but I'd love to know how. Their unique advantage was their focus on mathematics (as opposed to their competitors that tended to write books for evey subject) meant they could provide a better experience. But it would be harder to sell a mathematics book when the competitors could package up the whole curriculum.

I suspect now they're doing substantially better than when I worked for them. Australia has launched and rolled out a national curriculum, and they were in a good place to write textbooks to it. Their existing relationships meant it would have been easy to sell to existing South Australian schools, and their focus on the Australian mathematics market meant they could get a good product out much faster than their competitiors. This increases the potential market 10-fold and they could probably have easily captured a 2-3 times bigger market.

Another benefit since I left is the rise of digital textbooks. When they sell a subscription to a textbook there's no problem of resale increasing the number of sales, and they don't need to print the books and servers are cheap. Even at half the price it's probably worth twice as much to them, and they bundle physical copies with digital at no extra cost because it will increase adoption and barely increase their operational costs.

It's interesting to think I don't think they could start their textbook company again today. The national curriculum has increased the competition and digital technologies means its easier for existing textbook companies to expand their offerings to other markets. They saw a gap and they filled it and managed to, after a lot of time and effort, grow into adjacent markets and build a solid company. 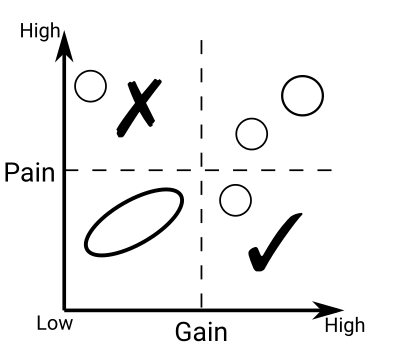 Placing options on a scatterplot of costs versus benefits is a common practice for prioritising opportunities and solutions. The primary benefit of this approach is it can spark discussions. When people see the options on the canvas they it can help uncover unseen issues and opportunities. Getting a group of people involved in putting it together can help get them on the same page. The primary risk of this approach is getting too precise about it.

We've found pairs of near duplicate texts in 400,000 job ads from the Adzuna Job Salary Predictions Kaggle Competition. When we tried to extracted groups of similar ads by finding connected components in the graph of similar ads. Unfortunately with a low threshold of similarity we ended up with a chain of ads that were each similar, but the first and last ad were totally unrelated. One way to work around this is to find cliques, or a group of job ad were every job ad is similar to all of the others.