The easiest way to do this consistently is with a includeIf statement. For example to have custom options for any git repository under a folder called apache add this to the bottom of your ~/.gitconfig.

If you just want the configuration to apply to a few specific repositories you can add local configuration in each repository in .git/config. Between these two methods you should be able to get the context dependent configuration you want.

The details of git configuration

I'm skipping over some details including worktree configuration, but this captures most of it. One other handy thing to know is the local configuration can also be specified to be a different file with the GIT_CONFIG environment variable or the -f/--file command line argument.

This gives you plenty of ways to set your configuration; especially when you combine this with includeIf (and the unconditional include) which inserts the referenced configuration file at that point based on the location of the gitdir or the name of a branch with onbranch.

You could actually implement the includeIf behaviour by setting environment variables based on your working directory, but that's a bit flaky and won't work if you use some tool outside the shell you configured it in. The includeIf method is pretty common and seems to work well.

The gitdir (and onbranch) in includeIf uses a gitignore style syntax so you could even do funky things like gitdir:~/src/**/apache/*/.git to get any repositories under ~/src one folder below an apache directory. I don't know why you would, but you certainly could.

One final gotcha; gitdir only works if you're in a git directory. So you can sort-of think of gitdir:apache/ as equivalent to gitdir:**/apache/**/.git, and the configuration won't apply in ~/src/apache/ if that's not a git directory. It rarely comes up, but can be confusing when debugging.

Python concurrent.futures are a handy way of dealing with asynchronous execution. However if you're not careful it will swallow your exceptions leading to difficult to debug errors. While you can perform concurrent downloads with multiprocessing it means starting up multiple processes and sending data between them as pickles. One problem with this is that you can't pickle some kinds of objects and often have to refactor your code to use multiprocessing. 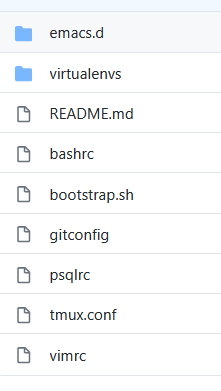 I keep my personal configuration files in a public dotfiles repository. This means that whenever I'm on a new machine it's very easy to get comfortable in a new environment. However I find I often need machine specific configuration, so I provide ways to override them with local configuration. When I get to a new machine I'll pretty quickly want some of my usual configuration (although I don't need it). I can clone or download a zipfile of my dotfiles and then install it via some symlinks via a bootstrap bash script.