I have a personal CV written in TeX. I wouldn't use TeX again today, but I've kept it maintained and haven't had reason to migrate it. Unfortunately the dependencies can be painful; whenever I move to a new machine I need to remember which packages I need to install. A Dockerfile is a handy way to wrap up the dependencies, and create a container with those dependencies.

Docker is a really handy tool for dependency management. If you're running on a specific system with a package manager you can use build scripts to set up an environment. But sometimes there may be conflicts with other packages on your system, or it may be tricky to set up. A Docker image lets you wrap up all the dependencies in a nice script.

For my TeX setup I already have make commands to produce different formats such as make pdf, make doc, make html, and make clean to remove all the files. To be able to run these entrypoints I use make as the entrypoint and pass a CMD which defaults to all, but can be called with any of the targets.

I also need to have the files available at runtime; I do this by mounting the current directory as /home and setting WORKDIR /home in the dockerfile. Then for example to build the image in a container named resume and then build html output I would run (from the directory containing the Makefile):

Other than that the Dockerfile just handles the dependencies. I have some scripts using Pandoc to produce the html and doc outputs, which is only available in Alpine testing edge, which I install like this:

Here's the whole Dockerfile for this example, which builds a 750MB image: 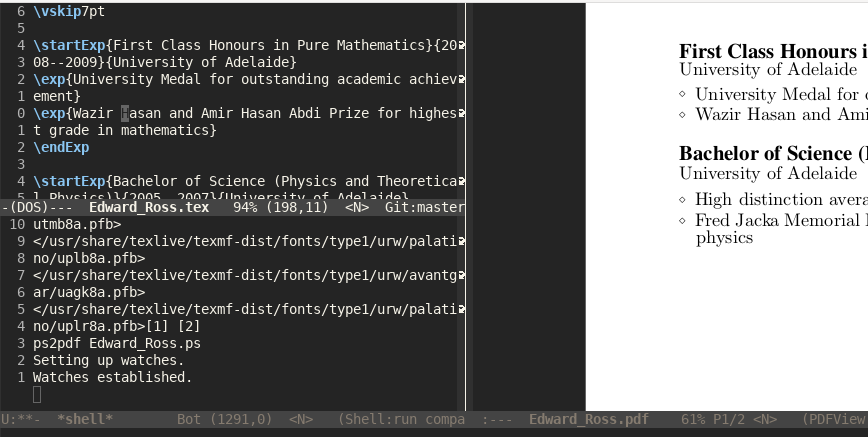 Sometimes it's useful to rerun a task whenever a file changes; whether that's a linter or a test suite, or a preview. I recently wanted to recompile a TeX file to PDF whenever I saved a change, and it was easy with inotify, using instructions from superuser. To install inotify on a Debian derivative you can use sudo apt install inotify-tools. Then you can set it to run a command whenever a file is done saving.