R core looks like it's getting a new pipe operator |> for composing functions. It's just like the existing magrittr pipe %>%, but has been implemented as a syntax transformation so that it is more computationally efficient and produces better stack traces. The pipe means instead of writing f(g(h(x))) you can write x |> h |> g |> f, which can be really handy when changing dataframes.

Python's Pandas library doesn't have this kind of convenience and it opens up a class of error that won't happen in that R code. Here's a typical bit of Pandas code:

There are so much repitition here it's easy to make a mistake. On the first line df_raw is typed 3 times, a typo putting in a different dataframe will lead to subtle runtime errors that are hard to pick up; I've debugged them in my own code many times. The second line has a similar problm where df_clean is typed 3 times (if df_raw was put ther by accident it could lead to an error). There's also other Pandas traps here; forgetting the brackets on the first line will lead to an error due to the precedence of &, and I don't know whether the second line actually changes df_raw (I may see some warning about that, and then if I want to preserve df_raw I'll put a .copy() in.

In R dplyr it's much cleaner and you can't accidentally type the wrong thing because we're chaining (here using the magrittr %>%, but soon we will be able to use |>):

In Pandas you can use method chaining (and tools like the pandas pipe) to clean it up. Using query we can get something close to dplyr, but it's still a bit clunky and query can be very slow:

However there are cases where it's really hard to do in Pandas, like getting the second most common value in a group. Because Pandas is built by appending functions to the Dataframe class if there's not a method for it you have to patch it in like pyjanitor does, but it you do a proper pandas extension it's quite verbose. In R because it uses a functional approach you can easily reuse common functions rather than having to write (and remember the names of!) Dataframe specific ones.

I think method chaining is a useful way to write data transformations; it exists in most functional languages Haskell, OCaml, F# and in Clojure's useful threading macros. It's even in Julia and there's a proposal for Javascript. You can implement it in Python in some sense using magic methods for infix operators, like Thinc's combinators but it's against the grain in Python which s not a functional language.

You're organising a conference of operations research analysts from all over the world, but their time is very valuable and they only agree to meet if you minimise the average distance they need to travel (even if they have to have it on a boat in the middle of the ocean). Where do you put the conference? Let's model the world as a unit sphere in 3 dimensional space, and have the N people at cartesian coordinates \( \{ p_i\}_{i=1}^{N}\). 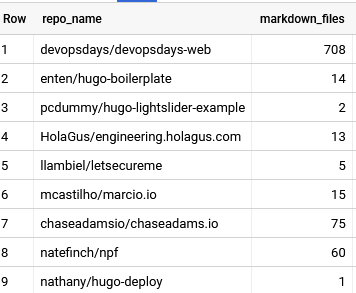 I want to find examples of other Hugo blogs, but they're not really easy to search for. Unless someone put "Hugo" in the descrption (which is actually common) there's no real defining files. However there's a set of files that are in a lot of Hugo Blogs and we can search them in Github with the GHArcive BigQuery Export. The strategy is that most Hugo blogs will contain a /themes folder, a /content folder a /static folder and a config.