Sometimes you have some description of a location and want to work out where it is. This is called geocoding; if you just want to know what state or country it's in it's called coarse geocoding. I found that while many structured JobPostings contain a country some have it as a description rather than a country code, and some put the location in other fields. We can often find the country using geocoding.

For example one job post has an addressRegion of Wales and and addressLocality of Dyfed. If I put this in the Nominatim geocoder built on Open Street Map it gives a plausible location in the United Kingdom. Similarly it can tell me that a job with addressLocality of Regensburg is in Bavaria, Germany. It can also tell me the country メキシコ is Mexico.

This is great, but if I want to use it at scale to process my data they have a usage limit of 1 request per second. While I could process the data slowly, or go to a commercial provider, I should be able to do it myself if it's build on Open Streetmap Data.

Nominatim can be self-hosted but it requires 64GB of memory for an installation and setup including PostGIS. This is because it's designed to be a performant address search engine at an address level. Trying to batch normalise addresses to a country level with it is like using a sportscar to plough a field.

However the placeholder library is a much better fit. It's a component of the Pelias geocoder, but for geocoding at a regional level, and runs on a 2GB SQLlite database. They have a live demo and a guide to getting a coarse geocoder in (almost) one line. Another candidate is twofishes from foursquare, but they don't make it as easy to use.

It's actually really easy to get started and returns a list of JSON results which works accross multiple languages. The top result is normally really good; here's an example of the output containing the 'lineage' of regions above it and a bounding box. The ids refer to Whos on First.

On my laptop running in a docker container I can fetch and parse a result in around 50ms. This is about 20 requests per second, so it would take around 14 days to get through all 1 million JobPosting URLs in the 2019 Web Data Commons extract. However many locations are repeated and this could be reduced by an order of magnitude with some caching. 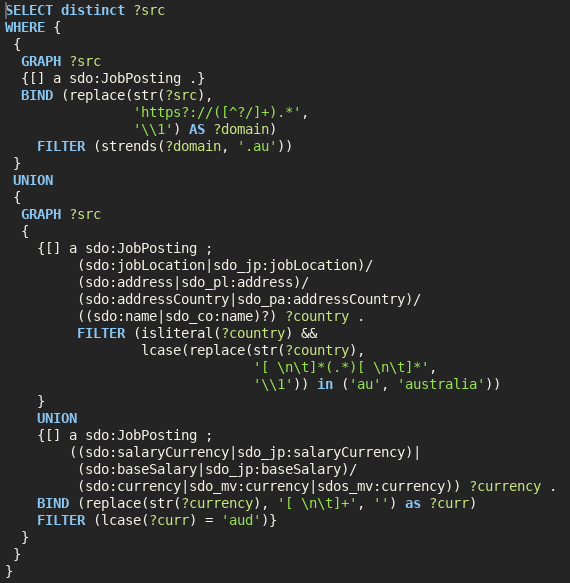 I am trying to extract Australian Job Postings from Web Data Commons which extracts structured data from Common Crawl. I have previously written scripts to read in the graphs, explore JobPosting schema and analyst the schema using SPARQL. Now we can use these to find some Austrlian Job Postings in the data. For this analysis I used 15,000 pages containing job postings with different domains from the 2019 Web Data Commons Extract.

I am trying to extract Australian Job Postings from Web Data Commons which extracts structured data from Common Crawl. I previously came up with a SPARQL query to extract the Australian jobs from the domain, country and currency. Unfortunately it's quite slow, but we can speed it up dramatically by replacing it with a similar script in grep. With a short grep script we can get twenty thousand Australian Job Postings with metadata from 16 million lines of compressed nquad in 30 seconds on my laptop.