Often in mathematics there is the idea of taking the closure of some elements under a particular operation. For instance if you have several vectors you may take the span of them, if you have a field and want to add the zeros of a particular polynomial you want to consider the corresponding extension field, given a set you often want to construct “the finest topology such that…”.

As a topological example the product topology is the finest topology such that the projection operators are continuous. For each projection we take the inverse image of the topology of the target space, and then take the union over all the projections to get a subset (of the power set of the cartesian product). Then the product topology is precisely the closure of this subset. [N.B. Don’t confuse the closure operator on topologies with the topological closure; but they do have a common root since the intersection of arbitrarily many closed sets is closed].

The closed sets are the the ones such that \(\bar{X}=X\) . This is in fact equivalent to my examples, the closure operator I constructed satisfies these properties. To see the opposite equivalence note

To find out more about this stuff check out the first chapter of Burris and Sankappanavar’s “Universal Algebra”. It’s free!

It’s also interesting to note the close relation to topology; these form part of Kuratowski’s closure axioms for a topology, but preservation of binary unions and the empty set don’t hold in the examples I gave above.

I’ll leave you with a (loose) connection to logic. A boolean algebra corresponds in a natural way to boolean logic, and a Heyting algebra (or Brouwerian lattice) corresponds to intuitionistic logic. The “dual”, in some sense, of a closure operator is an interior operator – if we can take arbitrary unions we define the interior of a set as the union of all subobjects contained within the set. A set with an interior operator is a complete Heyting algebra (and this close relation is used to define pointless topology – that is topology just in terms of sets and subsets, no mention of points – in terms of the open sets). 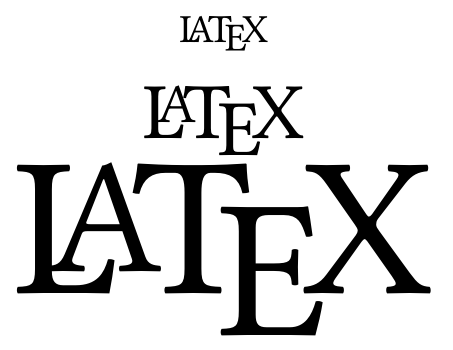 In mathematics and the (hard) sciences it’s important to be able to write documents with lots of equations, lots of figures and lots of references efficiently. This can be done in, for example, Microsoft Word, but the mathematics and theoretical physics community heavily prefer \(\TeX\) (and in particular \(\LaTeX\) ), so the bottom line is if you want to get papers published you’re going to have to get good at it.

There are a lot of resources for learning \(\LaTeX\) on the web, and a lot of people teach themselves from this (I know I did), but this can get you into some bad habits. For instance eqnarray gets the spacing around the equals signs all wrong. (I typeset my thesis using exclusively eqnarray and didn’t notice this until it was pointed out to me). So a lot of people advocate align from AMSTeX, but align has it’s limitations too; it only comes with one alignment tab &. If you want to make a comment at the end of multiple equations (like “for \(x \in X\) “) or you want to have two equations and the second one breaks over two lines you can’t line the equations up properly; but there is a solution – IEEEeqnarray (which is an external class, IEEEtrantools, available from the IEEE). Stefan Moser has written an excellent paper covering everything I’ve said and much more, showing good ways to typeset equations.