Suppose you are analysing email conversion through rates. People either follow the call to action or they don't, so it's a Bernoulli Distribution with probability the actual probability a random person will the email. But in actuality your email list will be made up of different groups; for example people who have just signed up to the list may be more likely to click through than people who have been on it for a long time. But we can ignore this distinction and treat them as a single group, when it makes sense to, for experiments.

As you'd expect you can ignore the subgroups and treat the combined group together. This would make sense in an experiment where you expect similar behaviour accross groups, or you're just interested in the overall effect. Because there's only one response variable it's not possible to distinguish the groups by the conversion rate alone. Note that this effect isn't true for other kinds of models, a mixture of binomials is generally different to a binomial. 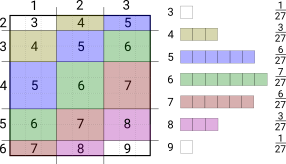 A geometric way to represent combining two independent discrete random variables is as a probability square. On each side of the square we have the distributions of the random variables, where the length of each segment is proportional to the probability. In the centre we have the function evaluated on the two edges and the probability is proportional to the area of the rectangle. For example suppose we had a random process that generated 1, 2 or 3 with equal probability (for example half the value of a die, rounded up). 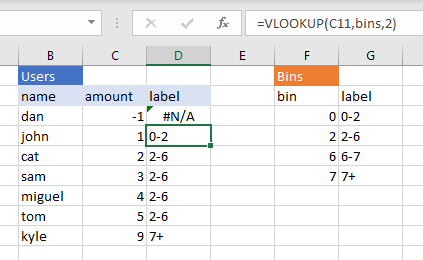 Generally when combining datasets you want to join them on some key. But sometimes you really want a range lookup like Excel's VLOOKUP. A common example is binning values; you want to group values into custom ranges. While you could do this with a giant CASE statement, it's much more flexible to specify in a separate table (for regular intervals you can do it with some integer division gymnastics). It is possible to implement VLOOKUP in SQL by using window functions to select the right rows.