I've estimated Australian oil imports; here I check the data to see how reasonable my estimates are.

The overall tree diagram for the estimate is below:

Australian oil imports can be found in Australian Office of the Chief Economist - Resources and Energy Quarterly September 2020 on page 87.

The total imports are about 1020 kb/day (made up of 645 kb/day of refined oil plus 375 kb/day of crude imports), which is remarkably close to my estimate of 1300 kb/day. Let's break this down and check the intermediate steps to see why it was so accurate, and check where there was dumb luck.

In the same report it mentions the consumption is around 1,000 kb/day so the assumption that imports is approximately equal to consumption is remarkably good. Australia does produce a significant amount of oil; around 300 kb/day but exports a similar number about 250 kb/day. This is quite curious; I'm not sure why Australia exports a similar volume of oil to proudction, nor the mixture of refined and crude imports.

Finally we assumed car usage is about half of all oil usage. In the same report it mentions that of worldwide usage about 30% is diesel, 26% is gasoline, 12% is LPG and Ethane and 8% is aviation. Some of diesel and LPG/Ethane usage will be in passenger cars, so it's probably around 30%, a bit lower than 50% but not dramatically so. Looking at Australian Refinery output in July-December 2019, it's about 5BL of Gasoline, 4BL of Diesel, 2BL of Aviation and 2BL of Other, so again slightly under half of usage being cars seems reasonable.

I'm ignoring the density difference in crude and refined oil; likely crude oil leads to a lower volume of refined oil but this is likely a marginal impact on the estimates.

We've established the assumptions on estimating oil imports with car petrol consumption in Australia is fairly reasonable. Let's trace our estimated car consumption of 100 ML/day, or about 36,000 megalitres per year.

This is remarkably close to my estimates. Given in the 2016 Census there were 23.4 Million people, the ratio of about 0.8 cars per person is about right.

This envelope calculation was unreasonably accurate given my knowledge of Australia's oil industry, although I have a lot of practical knowledge of the country from living in it. It would be interesting to try to extend this to other countries; it's a powerful way to gain a deeper understanding of how part of a country's economy works. 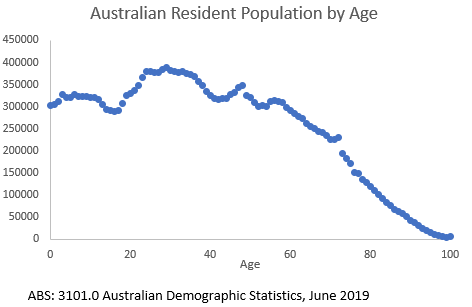 I've recently tried to estimate Australian Deaths using life expectancy. This failed badly and I think the reason is demographics; this article looks more into this. The Australian Bureau of Statistics has population by age, and the Australian Institute of Health and Welfare have Mortality Over Time and Regions (MORT) which summarises the current probability of death by age range. Here is a super summarised version of this data: Age Population Death Rate Population Deaths Fraction of Deaths 0-19 25% 0% 0% 0% 20-39 29% 0% 0% 0% 40-59 25% 0% 0% 0% 60-79 17% 1.